A letter by either Lemuel or Russell Oberlin, shortly before Lemuel’s death.

The grandparents came from Diamond Valley which lies between Harrisburg and Philadelphia, Pa., settled in 1705 by religious refugees from Europe who were Amish or Dunkard. In 1715, Scotch Irish settled in the same valley who were Lutheran and it is said was the first place in the Colonies, of that Religious Tolerance was practiced on arrival of the Scotch Irish. The Amish helped to build their church. Both settlements were on a communal basis, each Sect living in their end of the valley till about 1835 when the young people began to marry outside of their Sect. Such was the case of our Grandparents, living in a communal settlement. They were ostracized and given a share of the communal property in money and emigrated to Ohio settling in Stark County which in later years was incorporated into Summit County comprising the second generation. All are now deceased. Approximately 50% of the third generation are deceased from the arrival of the original Sire which accounts for 8 generations. This information was gathered from Ethomology[sic] Dept. at Harrisburg-Immigration office at Philadelphia and family records. There are probably 150 descendants living at the present time. In this long line, some have gained prominence in many lines. 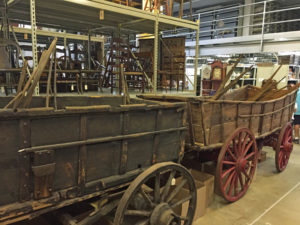 The Conestoga or Overland Wagon was first built by the Oberlin Clan on Conestoga Creek, the fore runner of thousands that crossed the U.S. in the trek Westward.

Our Grandfather was an Amishman and wore a flat hat – Grandmother was Scotch-Irish.

The Diamond Valley settlement is flourishing today – the same as in the beginning population, living in villages at each end of the valley – the farms lying outside of the villages and is a very fertile valley.

Grand Sire of the family was Michael Oberlin from Alsace Lorain. Arrival Sept. 16, 1751 on the ship “Two Brothers” – Capt. Wm. Mavir* commanding – as entered on the records of the Immigration Office in Philadelphia, Pa. There has been a variation on the name down thru the years – Oberly – Oberle – Oberlin. Settled in Lancaster County, Pa. On Conestoga Creek. Occupation: Wagon Maker for several generations – also a number were jewelers. During the Revolution, there were 6 sons who served as body guards to General Washington. Abraham Oberlin was the son of Andrew Oberlin, born 1810 and in 1832 married to Mary Stewart. To this union was born 10 children as follows:

*Michael Oberly arrived from Rotterdam on the ship “Brothers,” captained by William Muir. Often confused with the ship “Two Brothers,” which arrived 21 September 1751. Friderik Entzminger was also aboard “Brothers.”