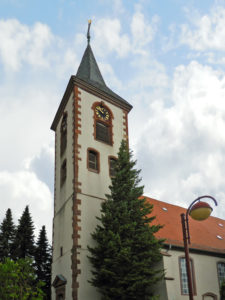 Liedolsheim is a village in Baden-Württemberg, Germany, situated between Speyer and Karlsruhe, about a mile east of the Rhine River. Primarily an agricultural community, as it’s been for several centuries. In 1978, Liedolsheim was consolidated into the community of Dettenheim, named after the 788 settlement at the same location.

My Oberlin emigrant ancestor is Johann Adam Oberlin and his first wife, Catharine Agatha Stober. There is documentation to support this linage. It is strongly believed that Johann Adam’s father was Johann (Hans) Martin Oberlin, from Liedolsheim, yet there is no known documentation of the relationship. The Liedolsheim church records were destroyed in 1734 during the siege of Philipsburg. In his 1901 book “Memorials of the Huguenots in America,” Reverend A. Stapleton states Martin is Adam’s father, but no source is cited. Catherine Agatha Stober was from Staffort, Baden, a few miles from Liedolsheim. They married in 1740 after arriving in America.

1534 – The farmland of the margrave (military governor) was let for rent to Bastian Oberlin and 23 other farmers.

1539 – Veltin Oberlin and Hans Oberlin are mentioned as witnesses of a contract.

1566 – Karl Aberlin is the only Oberlin in a list of all citizens.

1737 – Hans Martin Oberlin sold three Liedolsheim properties with the intent of emigrating to Pennsylvania. The record also states that he had paid for his leaving the country and had the proper permission from the Duke of Baden.

Hans Martin (and son Adam) Oberlin emigrated to America with other family members in 1738. This emigration was recorded in a family bible belonging to Mattaeus Oberacker of Liedolsheim. (The Oberacker and Oberlin families lived among each other for several generations in Liedolsheim.) The translated handwritten note in the bible:

“On May 16, 1738 the following people left for the New Land, these people are Martin Oberlin, Christoph Oberlin, Lorenz Meinzer, Michael Schmidt, Fredrich Tropf, Michael Uebel, Hanss Jerg Ochs, Hanss Michael Roth, Michael Geiss, Lorenz Schmidt and Hanss Jerg Uebel. They emigrated together with wives and children, their number was in the fiftieth”.

In the same year, families from surrounding villages Graben, Eggenstein, Blankenloch, Staffort and Rußheim emigrated to Pennsylvania. The Liedolsheim Oberlins had relatives in families from Rußheim, e.g. Buch and Speck. Many of the names of these Baden emigrants are found in the records of the Emmanual Lutheran Church, near Brickerville, Pennsylvania. This is where we find the early records of the Oberlin family in America.

July, 2014, Frau Oberlin and I were privileged to visit Liedolsheim and Staffort in Baden-Württemberg. The residents and officials of both communities were very gracious and hospitable. During our visit, we were shown some original documents and the locations of several Oberlin homes, including Martin’s. Both villages were quant, clean and appeared well managed. It was unique seeing new construction virtually adjacent to Medieval half-timbered buildings. The people treated us as guests and long lost cousins. Quite frankly, I was completely overwhelmed by the experience.

During a tour of Staffort with Dr. Oberacker and Mayor Lugwig-Wilhelm Heidt, we learned that Jacob Stober’s emigration was mentioned in a play portraying significant events during the village’s recent 900 year anniversary commemorations. While the original building no longer exists, we were inside the beautiful 1901 Protestant church adjacent to the village offices. A highlight of our time in Staffort was visiting their recently implemented forest kindergarten, which is a pre-school program that’s conducted almost entirely outdoors.

In Liedolsheim, we visited the Evangelical Church where the Oberlin family were members. Although the original building had been destroyed, the current building was completed the year prior to Martin Oberlin’s emigration. Much of the existing tower is from the original construction that is believed to be from the 15th century when there were laws prohibiting towers high enough to look down into the fortresses. Additional levels were added to the tower in subsequent centuries. To get a full appreciation for the various levels, we climbed the tower’s interior up to the clock level. An unintended “feature” of the climb was an up close and personal encounter with the 11:00 o’clock bell chiming. Dr. Oberacker has compiled a comprehensive history of the Liedolsheim church bells. 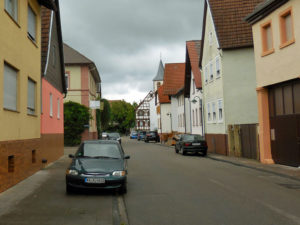 View toward the Evangelical Church from the site of Martin Oberlin’s home.

From the church we walked down Bächlestraße, past the site of the Martin Oberlin home, to the village hall. At the village hall were shown some of the documents from when the Oberlins were residents. Quite coincidentally, the village coat of arms contains a white horseshoe on a blue background. (The family’s apparently been Colts fans long before the team was in Baltimore. 😉 ) We were luncheon guests of Frau and Mayor Lother Hillenbrand at the annual Hähnchenfest, being conducted the day of our visit. It very much reminded me of the farm festivals I’ve attended in rural America. The post meal schnapps, however, was a new experience.

Several revelations were gleaned from our visit to Liedolsheim. One of the most enlightening was the effect emigration had on these small communities. Families who had lived, worked, played and loved together were literally removed to a new far off land. In hindsight, it seems natural that such events would be very emotional, but it’s not something I had thought about previously. I’ve looked at genealogy and family history from the “coming to America” perspective.

Following the family through the American Revolution and the subsequent westward migration has made the building of our nation personal to me. Seeing records of the family renting land from dukes, margraves and the church, brought to light another reality. The family was also part of European history. Living in the same village for over 250 years, they transitioned from a Medieval feudal society to becoming landowners. They experienced tribal rulers, monarchies, plagues, wars and the Reformation. There is a lot of history prior to Colonial America.