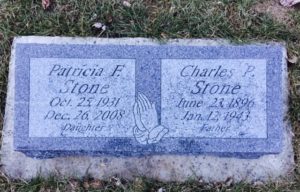 Charles Patrick Stone was my maternal grandfather. He and my grandmother, Angela Wagner were married in Chicago, 1930. Charles died in 1943, and virtually all that was known about him is based upon information he provided to my grandmother. My mother, Patricia Francis Stone, was born in South Bend, Indiana, 1931.

Through Ancestry.com’s DNA program, I’ve learned that Charles Patrick Stone was actually Guy Holland, born 1898 in Brigham City, Utah, the son of Alonzo Henry Holland and Elizabeth Brown. Guy was from a fairly prominent LDS family that kept good genealogy records. His mother, was a major contributor to “The Elston Family in America,” a publication documenting many of her ancestors. Alonzo was known locally as “Dad” Holland. Guy’s brother, Lyle, was a popular mayor of Cardston, Alberta, Canada.

As a family genealogist, this recent discovery is very enlightening. As a person, it’s almost overwhelming. I have virtually doubled the size of my known family and look forward to experiencing what discoveries lie ahead as a result.